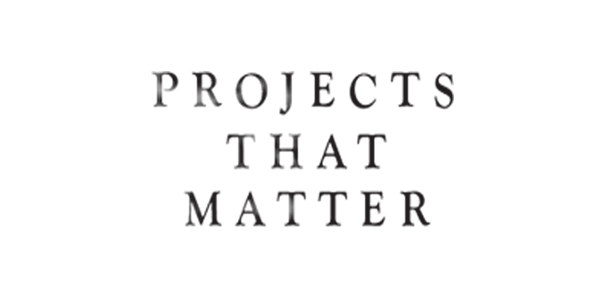 As part of our partnership with Cora, our creative director Justin Jarrett had the pleasure of traveling to India to capture footage for Cora’s Brand film.

Filming took place over two weeks in early March in several cities including, Kolkata, Delhi and Uttar Pradesh. The following are excerpts from his travels.

It’s late. I feel like I have been in the Bermuda triangle of traveling for the past 24 hours. Unable to sleep, I watched six movies on the plane — back to back to back to back and so on. I think I’m in India, or is this 1950 England? I can’t tell— the yellow cabs are the same. The travel fog coupled with the jet lag and the fact that we are currently doing 80mph down a highway with no lanes or turn signals and what seems to be a honk twice and get out of the way or I am going to run you over Road Rash style mentality is the only thing keeping me from passing out face down on the pavement.

The tranquil peace exuberating postcards lied. India is anything but quiet. Riding in cabs in India makes riding in New York City cabs look like a Sunday joyride in a horse drawn trolley. We are less than 8 minutes deep into our journey halfway around the world and I can already tell you that if I make it back to the states alive, I will have a new appreciation for Grandma’s sub 45 mph driving technique. All I can think about is how much this surreal moment feels like a music video for Rob Zombie’s “Superbeast”. Good thing I love roller coasters….here we go.

Half a world away

It’s 1:42pm in the afternoon here. I couldn’t even tell you what day of the week it is if you asked. Im sitting outside – just listening.

The sounds here are incredible. I know that may sound strange…but unless you have heard them with your own two ears you wouldn’t understand – as my traveling companion so eloquently put it, “There is chaos and tranquility side by side. Everything is right up against everything else, and all lines begin to blur. It’s a frenetic collage of energies.” There are kids laughing, motors and horns screaming, and fruit and spice vendors calling out in hopes of their next customer. This is the hustle and bustle of a modern day New York City, but it’s not New York City at all – It is Kolkata – the capital city of West Bengal, India.

I am a long way from home. I am currently here on assignment for PTM with the Founder of Cora Women, Molly Hayward. Our mission here is to capture footage and interviews to be used in a company launch project as well an overall larger project that I have been working on for more than two years about women’s rights and education around the world. 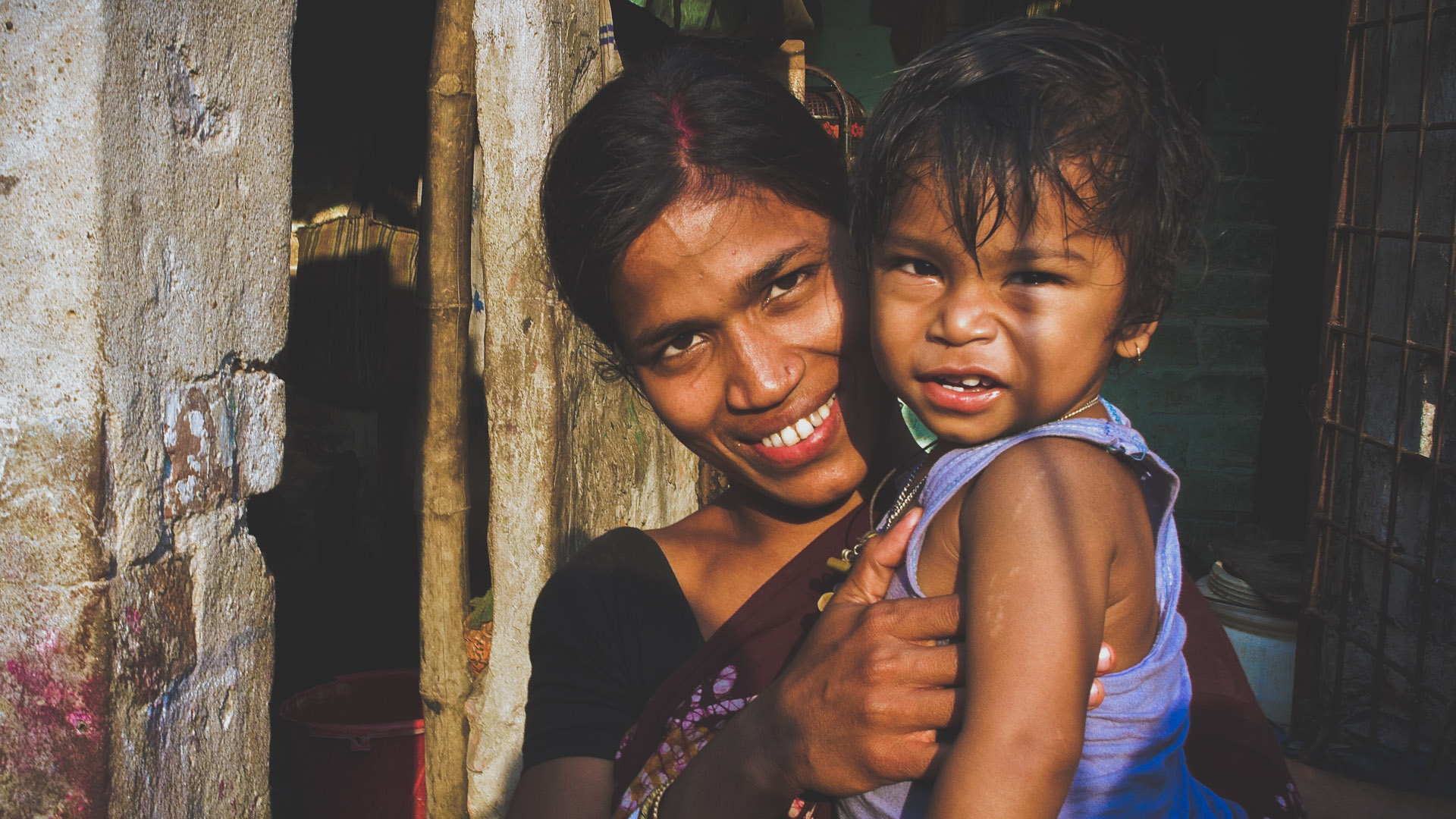 I’m staring down a hallway. To my right beautiful chalk paintings, most likely drawn by children. To my left, a multitude of rooms. Wooden beds take up the majority of the space. The floors are dirt and littered with piles of old food and trash being picked at by dogs and goats finding shelter in the shade from the blazing sun. Women wash cook wear and men sit on small wooden stools along the wall. 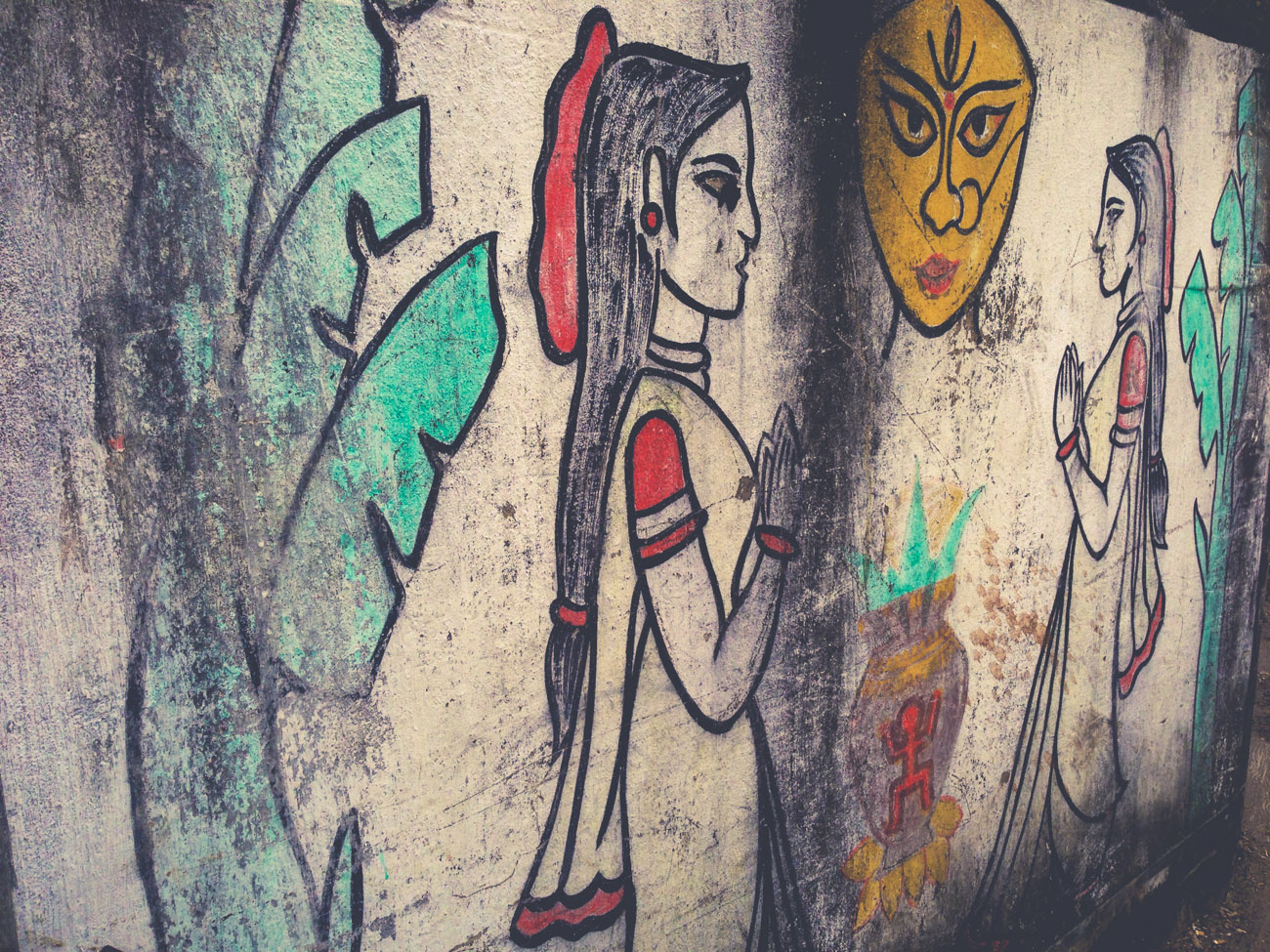 The women smile and laugh as I pass through. The men have looks that could pierce steel.  I am walking through a brothel in Kolkata. 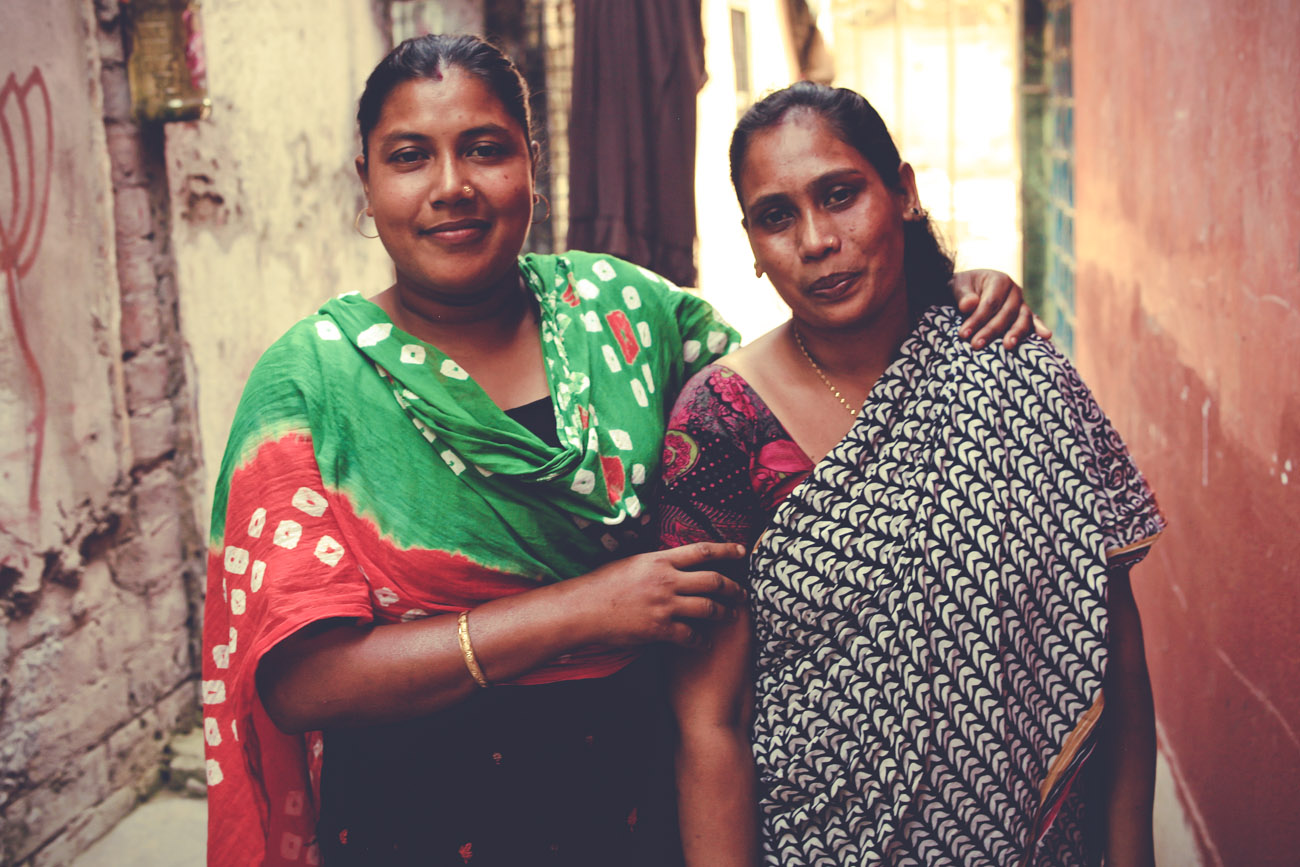 I am on my way to film one of the most important interviews of my life. To put this in context, I have directed Shaquille O’Neal in commercials, played golf with Super Bowl champions and shared a bottle of Patron with Steve Urkel…yes the real Steve Urkel. I have never been star struck before. Yet, I find myself in complete and utter silence as I sit across the table listening to what could only be described as one of the most brutally honest conversations I have ever experienced.

I am sitting across from renowned activist, Urmi Basu at her New Light, headquarters located above one of the most active brothels in Kolkata. She is friends with Oliver Stone and M. Night Shyamalan. She is known worldwide from her appearance in the PBS documentary, Half the Sky. She talks of the realities of modern day India and of the hardships women must face. I can hear it in her voice – she has a mother’s love for every single one of the girls she watches over. I’ve never seen such an endearing and optimistic spirit in anyone like this before. 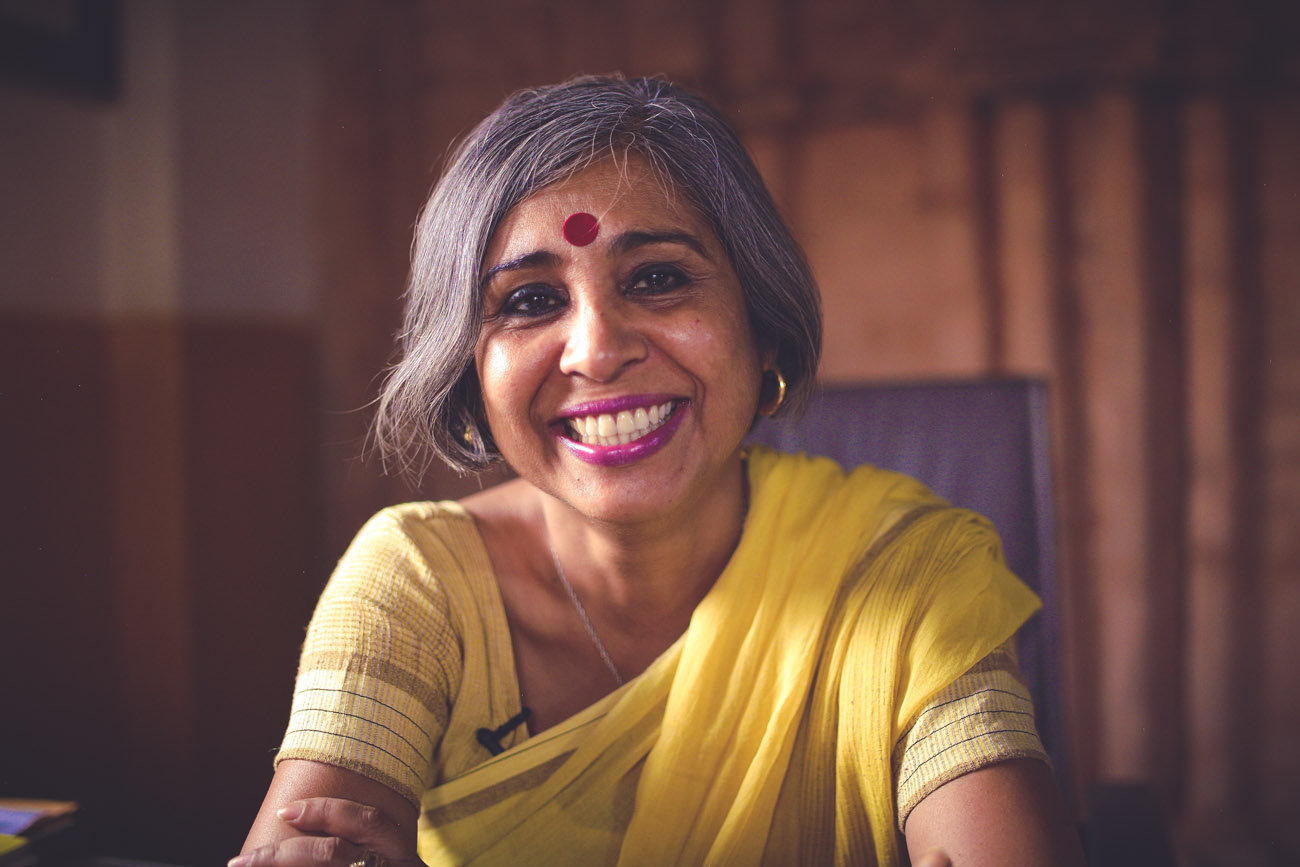 The more I travel the world, the more I see. The more people I come to know and call my friends, the more I believe that we as humans are innately drawn to one another.
Our pasts, our present and even our futures are so bound and intertwined that we cannot see where one stops and the other ends. 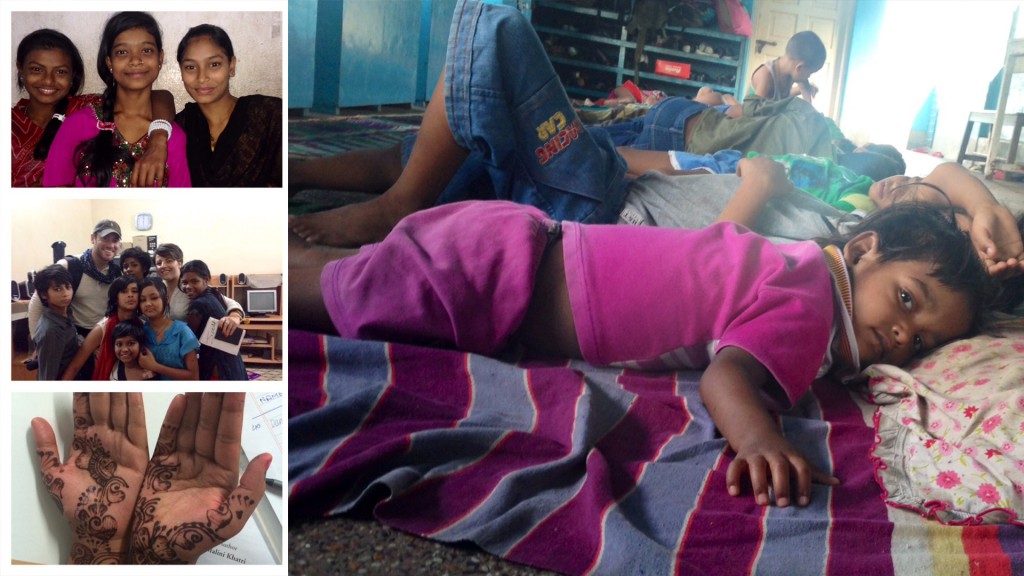 Today I find myself at one of Urmi’s New Light Schools. These young girls come from all walks of life with backstories that read like a Hollywood screenplay. The majority are at risk for sex trafficking and removed from their homes at an early age to get an education. They have agreed to spend the day with us. 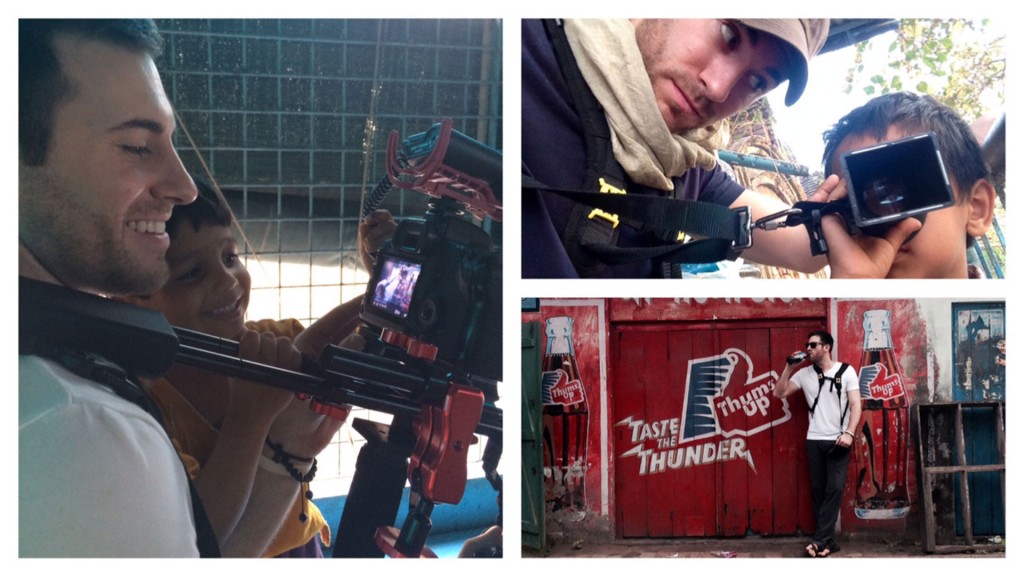 As the day begins and these girls begin to open their lives to us little by little I begin to see a pattern. The backstory doesn’t matter – those have come and gone now. What matters are the smart, beautiful young women sitting in front of me right now. They are unbelievably poised and well spoken as they tell me of their dreams to be doctors, actresses, and singers when they grow up. A few girls tell us they want to be dancers and volunteer to dance for us. 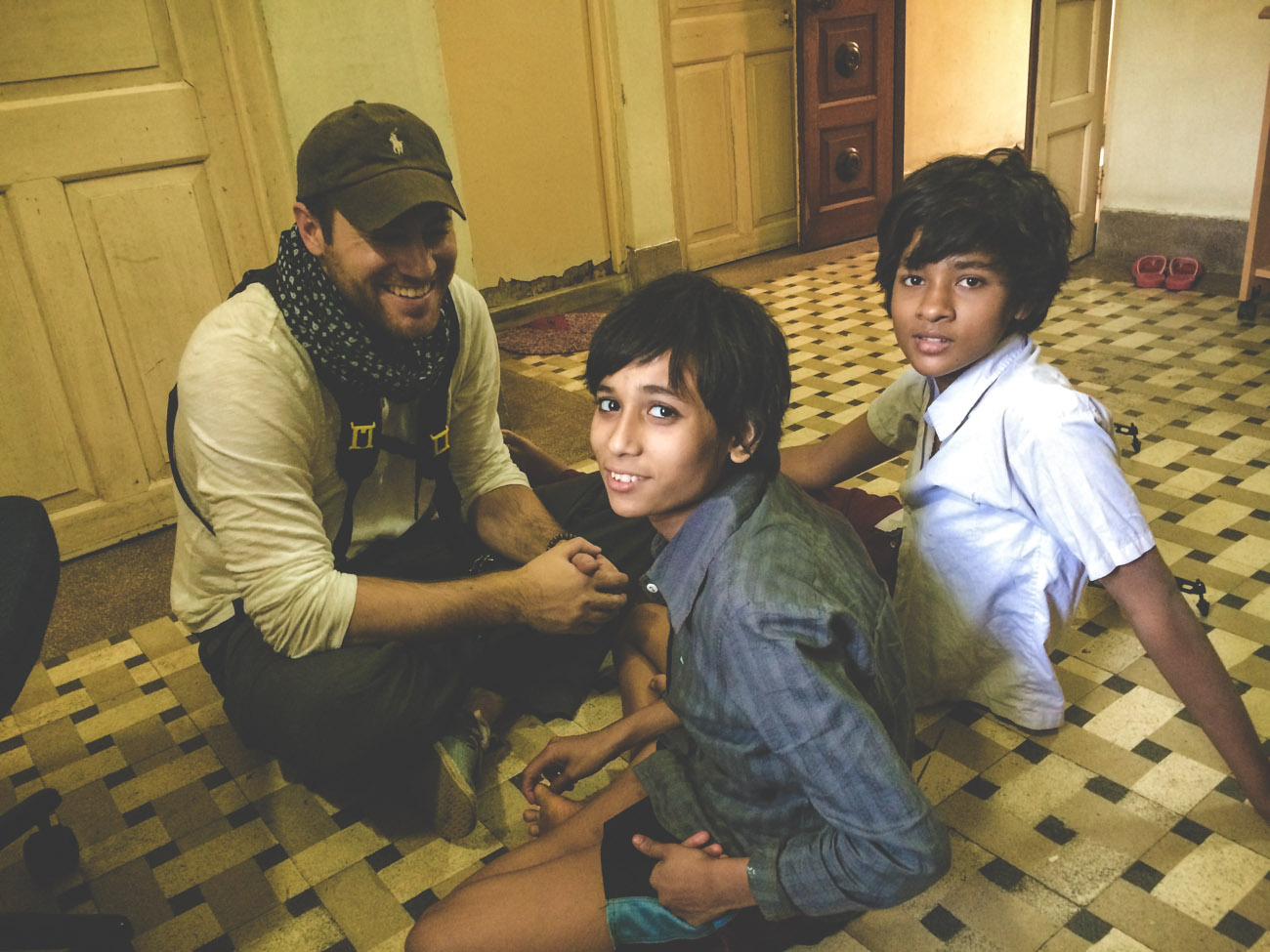 One thing is certain – these girls have a bright future – and for the first time I understand why Urmi called her organization New Light.

Five hour plane ride….check. Four hour car ride…….check. One bout of food poisoning for my colleague and traveling companion….check. Having gotten a bad case of Ecoli during my travels to Kenya— I understand her pain. Sometimes our stomachs don’t have the same sense of adventure as the rest of our body.

We have just arrived in Uttar Pradesh at Pardada Pardadi . We are here to capture more footage. With my partner bedridden for the next two days it is my job to finish the story.

I began exploring the school and found a group of girls playing futbol outside on a dirt field. They invited me to play and I gave them a GoPro camera so that they could capture the action. This is something that has become somewhat of a tradition for me. Every time I travel around the world and meet children I always give them the GoPro and let them takeover. I love seeing what they do and the reaction on their faces. 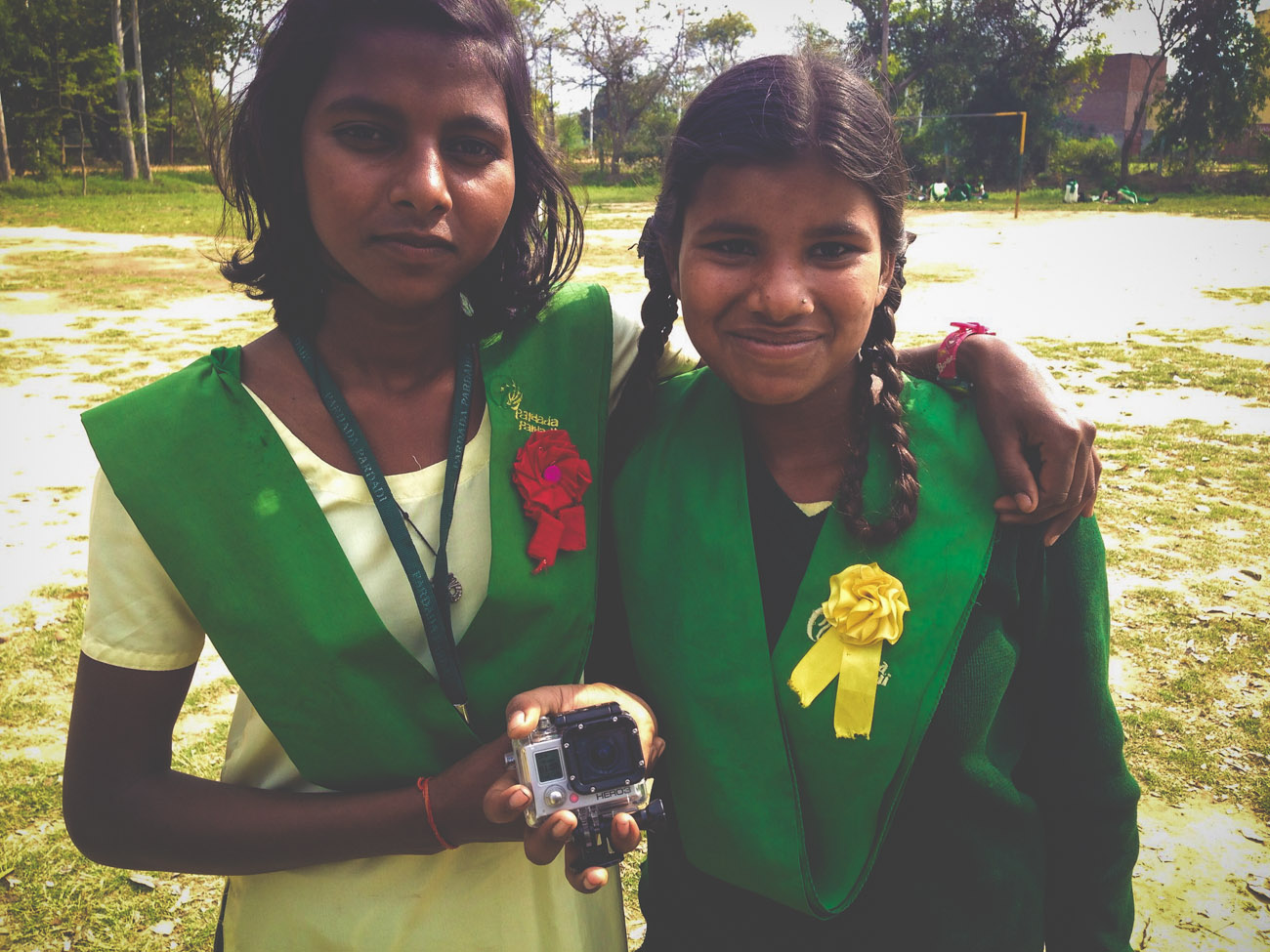 We have been welcomed with open arms here. The school’s founder, known as Sam to most – a former Dupont executive from India who has chosen this location to “retire” offers his words of wisdom that can only be summed up with a story from Sam himself.

“if you know your mission is to get to the moon, but you need a crew to get there and your crew wants to go to the beach, what do you do? You make sure the mission to the moon stops by a beach on the way there.” 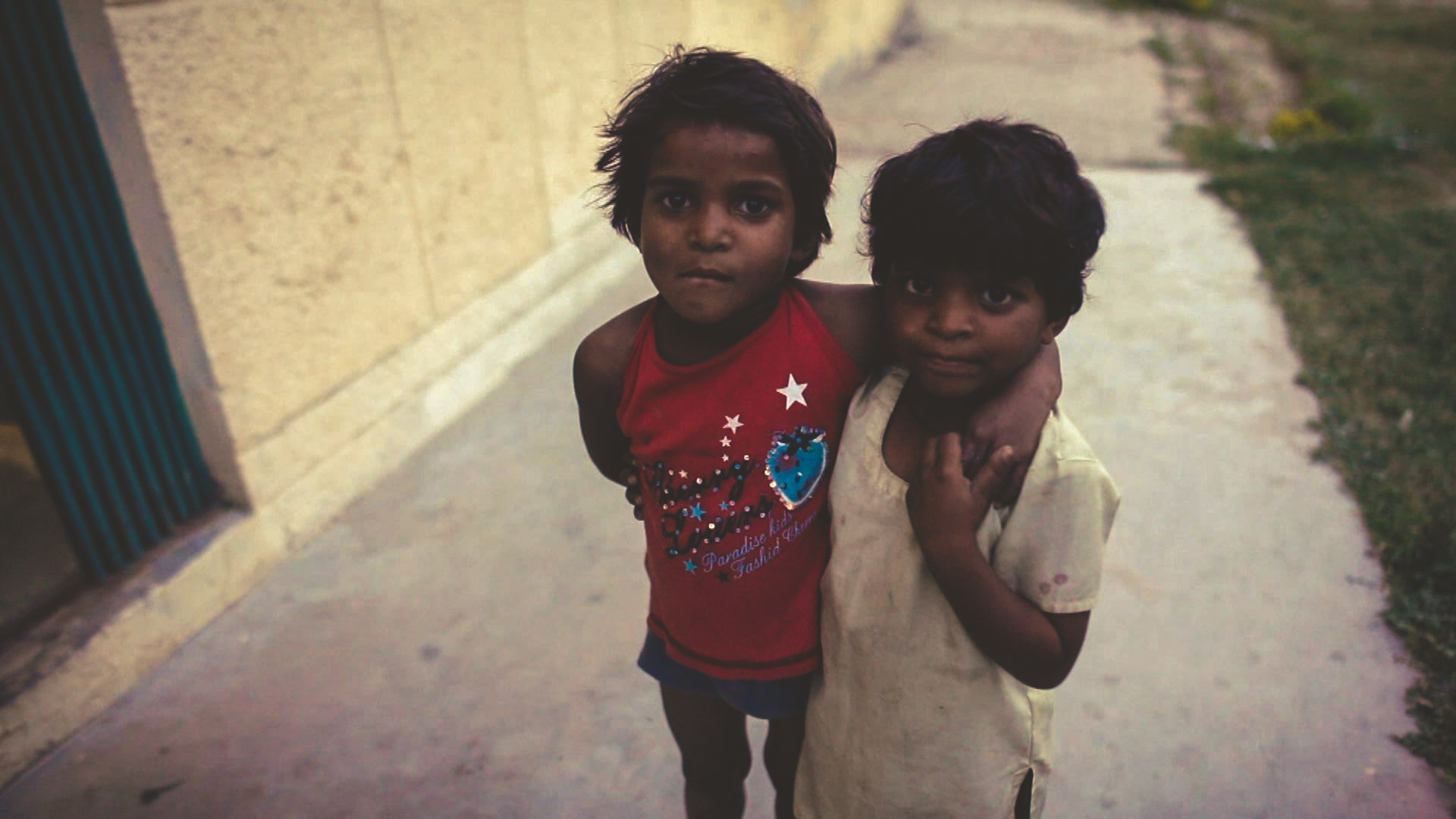 Sam is referencing his village toilet project. He commissioned the build of a toilet and bath house in a village. Only to have the villagers move their cows into the covered bathhouse while the villagers continued to use the neighboring fields.

He quickly realized that money doesn’t solve issues – education does. To which he responded, ‘to change a village one must first change the minds.”

The sun is going down. The day is fading fast. The streets are more alive than ever. My time in India has come to an end.

Describing this place to my friends back home will prove to be a challenge. The contrasts are drastic – beautiful yet harsh. Loving yet cruel. Peaceful yet chaotic.
It’s the charm of this place that draws you in but always manages to keep you at an arm’s length so that you don’t get too comfortable.

I have met some of the kindest most gentle souls I will ever come across. Yet it is not lost on me how difficult their lives have been. Most welcome you with open arms and a smile, but in their eyes — a pain I will never understand. The Indian Caste System, created as a means of control, is archaic in nature and hovers over this place like a storm cloud waiting to erupt. I feel for my new friends. However, I am also taken back by how strong and unbelievably happy they seem even in the face of despair. I will miss my friends.

This place, this land seems torn from a history book – out of place in this new world, yet it couldn’t feel anymore alive than it does right now. It seems this place grows as fast as it decays, a never ending paradox of tranquil chaos.

As I board my plane I look out at the blazing orange sky. This is not my last Indian sunset. 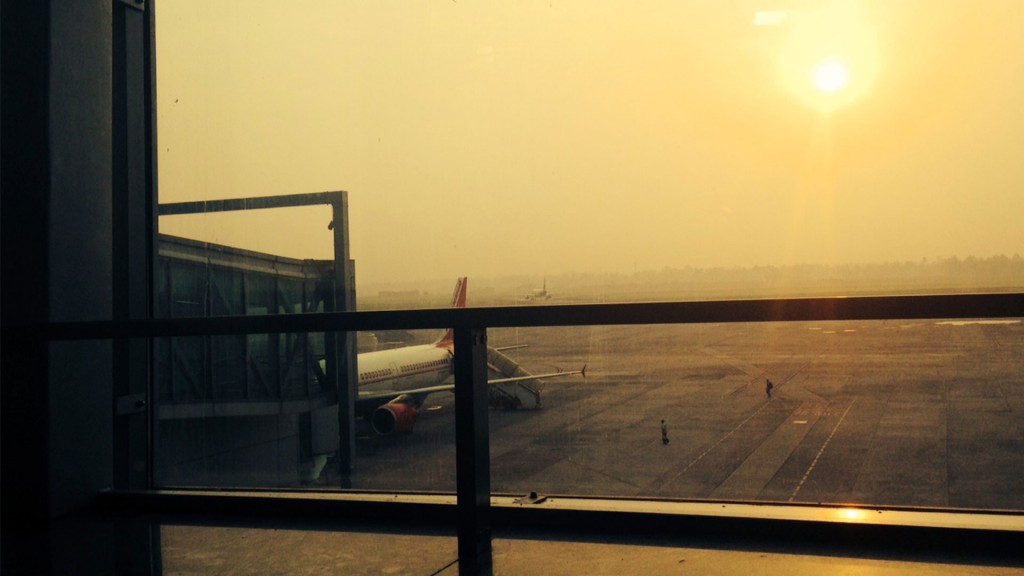 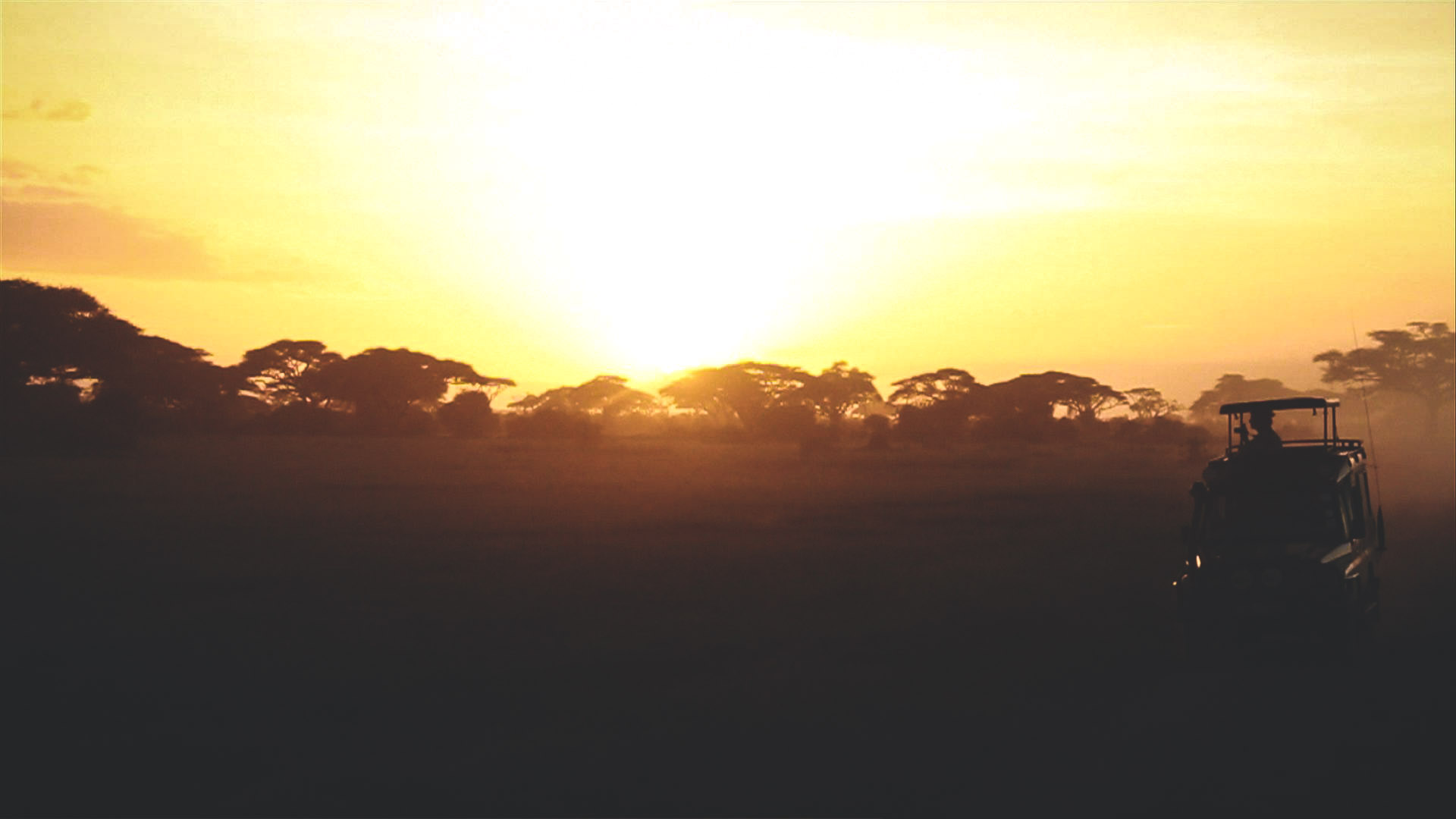 © PROJECTS THAT MATTER IN ASSOCIATION WITH JTWO FILMS LLC. ALL RIGHTS RESERVED.